After spending most of spring in vocal heaven with Morten Harket, I’m now pleased to announce the release of “Cast in steel”, A-ha’s comeback album. Three songs co-written, full production credits on two songs and vocal production on another six songs.
It was a pleasure, a challenge, and an experience I wouldn’t trade for anything working with one of my favourite bands. Good luck with the tour Morten, Magne and Pål! <3 <3 <3 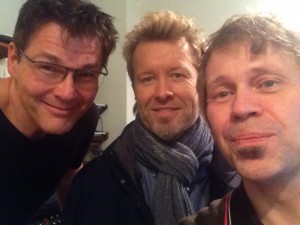