Two weeks ago Owe Thörnqvist, the legendary Swedish singer/songwriter who debuted in 1953 (!), entered Melodifestivalen as the oldest contestant ever. And is that wasn’t enough, Owe went straight to the final with his song “Boogieman Blues”, composed by himself and produced by yours truly. So on Saturday he’ll perform it in the final in Friends Arena here in Stockholm. Wouldn’t suprise me if he would be chosen to represent Sweden in the ESC final in Kiev later this spring! This 87 year old is no ordinary elderly gentlemen, the guy has more energy than most people in their 20s! Click the link below for a video clip from our first session together, when we were going to record the harmonica solo. Owe asked me to “put up some 12 bar rounds”, he’d play along and try to come up with something useful. What do you think? 😀 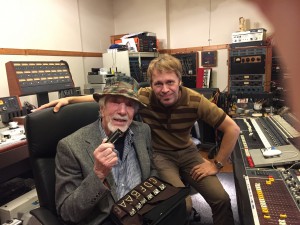